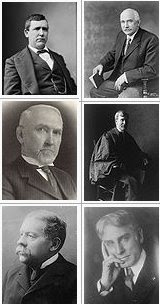 ...just because the first eighty-one attorneys general had, for the most part, serious skin pigment deficiencies.

Photos of past AG's from here, running the gamut from pinkish beige to cream, mostly.

Congratulations, Mister Holder. Being AG is the same as commenting on a blog, rule number one, "don't be an asshole." Gonzales and Mukasey kinda failed there. Gonzales was actually a complete fucking asshole. And he gets no points off for being unusually non-white.

We've heard rumors that our new AG-elect doesn't like the Patriot Act. That would be a good place to START.
permalink 2:59 PM