If you're a feminist, you must have a voice. (huh?) 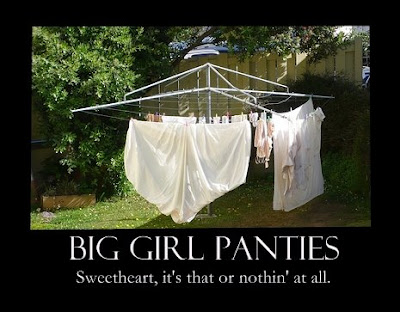 I had a lot of visitors here last week from the terrific blog "I blame the patriarchy." Twisty Faster is a past Don't Sugarcoat It Award winner and she's blogrolled here, too. But many of her visitors were lurkers, and none of the few who felt bold enough to comment left a link to any "blog of their own" or contact info. I didn't like getting sniped at by anonymous feminists, and turning off anonymous comments is not an option, because some non-bloggers use that option and then sign their comments and also email me off list. (Thanks, OG.) Eventually I turned off comments at the posts in question, because it just depressed me to see women who clearly had something to say, deny themselves the right to own it or actually engage in a dialogue with me. I'm right here, sisters.

I feel really bad about the whole deal, because if a feminist can't feel safe to criticize, vent, suggest, or applaud with their own hands, EVEN at a four-year-old blog written by a woman who has, in contrast, gone quite public, that there's some serious fear. Don't get me started about why don't these women have their own blogs. It's such a male-dominated blogosphere and yet, don't we have modems, too? If they were just being polite by not criticizing me at my own home, why not post a link to my blog and say "what gives with BG?" That's what the commenter at Twisty's did, but then commenter hasn't updated her own blog in over six months. Don't get me started.

If we want to LIVE as equals, we'd better start sometime, and that means eradicating the fear that keeps us hidden and silent. If the fear is defensive, we must nurture its victim. If the fear is just unwarranted anger in disguise, or worse, laziness or avoidance of responsibility, we must confront it.

h/t Tyrant of the Seven Seas, who was kind enough to ask the question, and not in a Neil Cavuto way.

UPDATE: Here are articles on male predominance in the political blogworld, both in terms of audience and writers.
permalink 10:06 PM